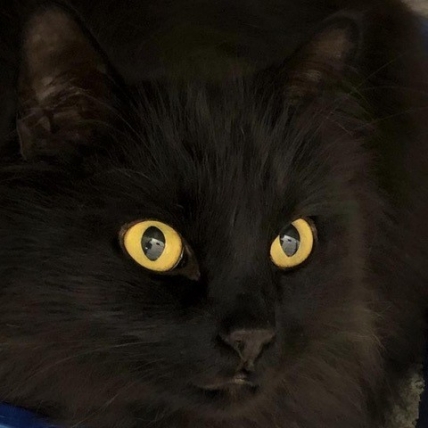 Laura recently got to spend some time with Simon and she tell us…”Simon is a greeter! He follows me from the door to hop up on the shelves so he can purr in my ear and head bump in a cheery fuzz ball way. Gorgeous long hair and classic face.”

She is right! Simon is one dashing fellow…from his long jet black luxurious coat to his gorgeous yellow eyes. He is sweet, mild mannered and sure to keep your lap warm during a chilly afternoon. He also plays ball and comes to a whistle. Simon loves dogs and would be better with older children, but needs to be the only cat. He is 7 yrs old, loves attention and affection and is ready to go to a wonderful home!

If you’d like to meet Simon, please call the animal shelter at 503-861-7387 for more information or to make an appointment.

Check out his Petfinder profile at https://www.petfinder.com/cat/simon-48243456/or/warrenton/clatsop-county-animal-control-services-or53/ 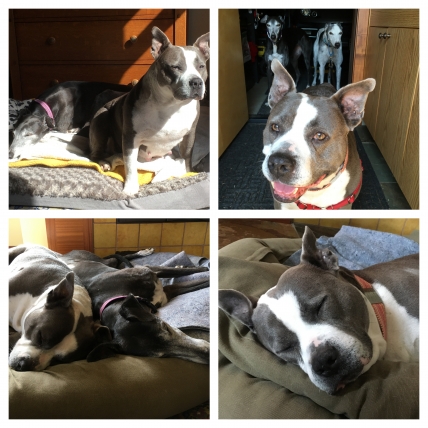 Pudge has been enjoying life with Dan, Sue, Olive and Herbie since late last year. Here’s an update we just received:

“Pudge loves the current stay-in-place order.   She is very good at staying in place.  One place…for a long time…until dinner.  Then she is happy to move from her spot in the sun to her dinner bowl.  We have enjoyed spending oodles of time with our old greyhound and new to us bundle of love. Pudge continues to amaze us with her many noises.  There seems to be a new one for every occasion.  There’s one for scratching her ears, another for rubbing her belly, and yet another for enjoying a good meal.  Our greyhounds (Olive and Herbie) are quiet and graceful, yet we love the Cacophony of Pudge. She snores like chainsaw at full throttle, but chirps happily while eating a treat. She has also mastered the art of weaving between the greyhound legs during walks.  Despite her rotund physique, she stealthily finishes their dinners and beats them to every sunbeam before they know it. We love this furry package! Thanks to all of the staff and volunteers at the Clatsop County Animal Shelter! You have brought our furry soulmate home :)” 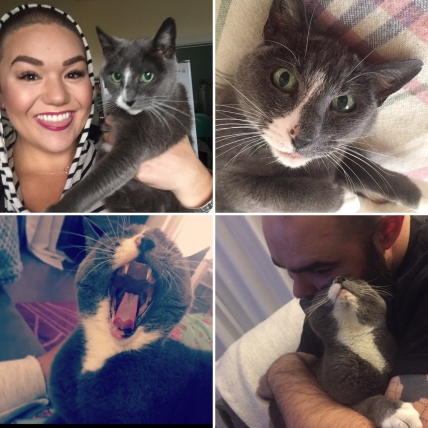 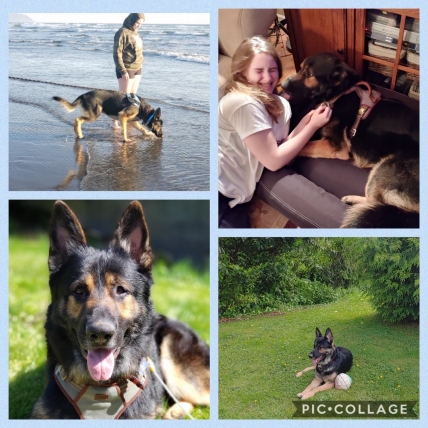 Valiant’s family is working hard to bring out the best in him. Here’s what they wrote last week:

“Our family came to visit Valiant four separate times in February 2020. While we had concerns, based on what we had heard with how he was with other dogs and children…we talked in depth as a family about the pros & cons…but in the end, we all agreed that there was something that we all saw in him, that we knew, with love and time, that we could hopefully bring to the forefront. We brought him home on March 4th, and we have worked with him every day…on his manners, on not taking off and running away at the first chance when the door opens (which happened 4 times), as well as being nice to other dogs, cats and people he doesn’t know. He’s learning to play with 3 little dogs, that belong to our oldest daughter and her boyfriend. He responds well to verbal cues, in both English and German, and we’re teaching him sign language also. He loves going for rides in cars and trucks and gives us great snuggles. He LOVES his tennis balls, playing in water at home and running in the ocean.

While we have only had him for a few short months, and we know we still have work ahead of us, he is SO smart and has improved so much already, and his trust and respect of us has started to grow as well. Valiant is almost 3 years old and while he has had a lot happen in his life before us, he has made great strides so far and we expect that by this time next year…with continued love, patience and time, we will have an even more amazing dog than we already have!” 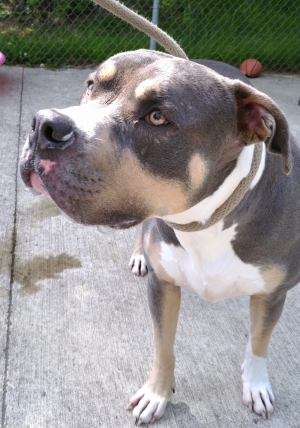 Gracie is a 4.5 year old American Pit Bill Terrier mix looking for a wonderful home! Gracies is a seriously good dog…She has that winning combination of being an active dog that can relax as well. Gracie loves to just hang out chasing a ball in the play yard (but she doesn’t get fixated..also a great quality!). Her coat is unique and all the volunteer comment on her beauty. She is a mixture of peach, grey and white and basically a big love bug who likes a long walk and wags her tail when humans and other dogs walk by.

Dedicated shelter volunteer Sue shares…”Gracie is a sweet girl, young at heart and in age. She dives into life – plays in the yard, splashes in the pool, trots on trails and naps curled up in a soft blanket. She convinces you to walk just a little longer, just around the next corner, just to see what’s there. Gracie is a soulmate.”